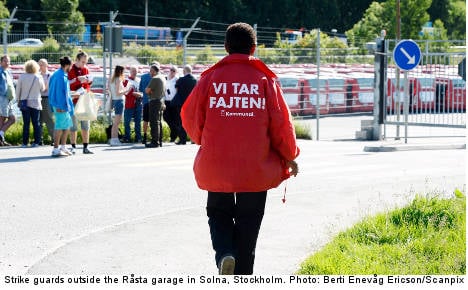 The strike affects nearly all bus routes in central Stockholm as well as several suburbs – Södertälje, Solna, Sundbyberg, and Sollentuna. It also includes the northern Swedish city of Umeå.

A total of 1,400 bus drivers walked out and roughly 100,000 commuters are affected, according to Thomas Silvander, a spokesman for Stockholm regional transport operator SL.

Silvander told news agency TT that SL was unable to offer alternative transport to replace the cancelled buses and instead advised commuters to carpool or cycle.

However, the student association Fria Moderata studentförbundet (FMS) rented two minibuses to ferry commuters between the Södersjukhuset hospital in the south of central Stockholm and the Karolinska University Hospital in the north, a route usually covered by the number three bus.

In a press statement, FMS explained their action as a compensation for “the Kommunal union’s careless unwillingness to compromise”.

Hugo Selling, president of Högerjuristerna, one of the student associations within FMS, said it is also a statement against the union’s “exceptional position in the wage negotiation process”.

“We will not get the care we need because nurses and doctors will not be able to make it into work,” Selling told TT.

“I as a consumer and commuter in Stockholm must be able to count on being able to get to my job,” he insisted.

Lenita Granlund of Kommunal was upset by the Conservative youths’ actions.

“It is completely disrespectful and unacceptable,” she said.

Granlund added that the students should have respect for bus drivers “as they know what work conditions they have”.

Ivo Tomkovic, a bus driver and workplace ombudsman in Stockholm, told TT that there is widespread dissatisfaction among bus drivers but said staff and employers were “quite far apart” in the negotiations.

On Wednesday, union reps wore red jackets with the slogan “We’ll take the fight”. Most workers are reportedly prepared to strike for the long haul, if necessary.

Granlund did not want to say whether the Conservative students’ action was a case of scabbing, but added: “We will look further into this”.