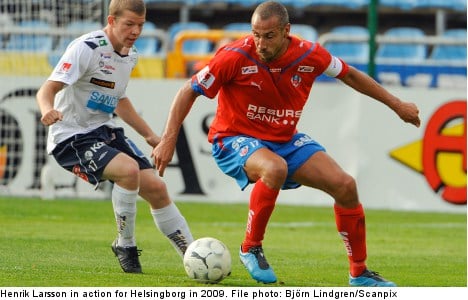 “It was great fun to play. I can’t remember the last time I played for Högaborg,” Larsson said to the Aftonbladet daily after the game.

Larsson, who made his name at Scottish side Celtic before short spells in the twilight of his career at Barcelona and Manchester United, turned out for the Swedish fourth tier club in order to ease a striker injury crisis.

The 41-year-old local lad, who serves as assistant trainer, came on with seven minutes remaining of the tie against Tenhult which ended with a 4-2 win for Högaborg.

While the veteran goal-poacher’s impact on the play was limited, Larsson’s appearance was enough to grab the attention of the international press, with UK newspapers The Guardian and The Daily Mail both penning write ups.

The news even extended beyond the English-speaking world with newspapers in Hungary, Belgium, Indonesia and Vietnam picking up the story, according to Aftonbladet.

The match is however unlikely to signify more than an interesting anecdote in Larsson’s prestigious sporting career, with the former Swedish captain explaining to the newspaper that further appearances are unlikely.

Aside from helping his team out of a bind, the match completes the circle for Larsson who had long expressed an ambition to finish his career where it all began.

Larsson spent his youth career at Högaborg before playing 64 times for the first team, registering 23 goals.

He moved on to local giants Helsingborg, where his 50 goals in 56 appearances was enough to attract the attention of Dutch team Feyenoord.

Larsson moved on to Glasgow in 1997 and spent seven years with Celtic before short spells with Barcelona, where he notably came off the bench to help the Catalans to win the Champions League in 2006.

While Henrik plans to return to the dugout, the family name will however remain on the teamsheet for the immediate future as son Jordan is a member of the Högaborg first team squad.