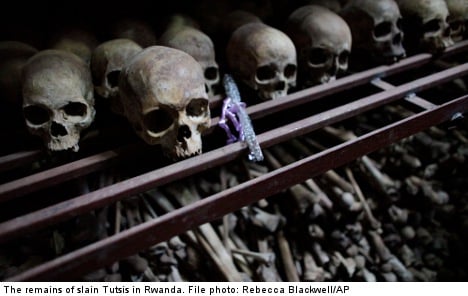 “The accused has had an informal role as a leader and has himself fired at the crowd with an automatic weapon,” the district court stated in its verdict.

Stanislas Mbanenande, 54, a Swedish citizen of Rwandan origin and an ethnic Hutu, allegedly took part in massacres in his homeland between April 6th and June 30th, 1994 that left thousands dead.

Mbanenande was accused of having taken an “informal role as a lower-level leader among young Hutus who sympathized with, or came to sympathize with, Hutu extremism”.

His leadership status was also borne out by the fact that he possessed an automatic firearm, which he is said to have fired into crowds.

Mbanenande stood accused of having murdered or recruited young men to take part in massacres.

He was ordered to stand trial in Sweden after Stockholm was unable to comply with a request to extradite him to Rwanda, where he has been given a lifetime sentence in absentia, due to the fact that he obtained Swedish citizenship in 2008.

Mbanenande has been in Sweden since 2007, when he joined his family and obtained a residency permit on family reunification grounds.

In another first in Swedish legal history, part of the trial was carried out in Rwanda, where witnesses testified in the high court of Kigali, the Rwandan capital.

For practical reasons it was not possible to bring some of the 40 witnesses to Sweden, meaning the Swedish judges flew down to Rwanda. The convicted man, however, participated in the trial via video link from Sweden.

Mbanenande denied all charges following his arrest in December last year under an international arrest warrant.

The killing of Rwanda’s Hutu president Juvenal Habyarimana on April 6th 1994 triggered a genocide in which 800,000 people, mostly from the Tutsi minority, were killed, according to UN figures.