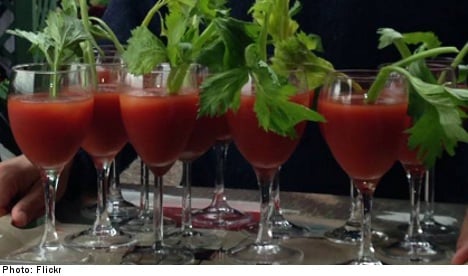 The Midsummer weekend is traditionally accompanied by generous quantities of alcoholic beverages and with the excess comes the payback – the hangover.

“The liver breaks down alcohol in limited quantities per hour. Hangover occurs when drinking over biological capacity,” explained professor Sven Andreasson at the Stockholm Centre for Dependency Disorders.

The safest way to avoid being hungover is of course to completely avoid alcohol, or at least to drink in moderation. Sven Andreasson warns that festive Swedes should reflect on how they drink.

“The total amount sets a certain limit, but it is also about slowing down the rate to an amount the body can handle, by for example drinking water between drinks or eating food.”

Andreasson informed that the typical maximum amount for an average person is around 3-4 glasses of wine, or the equivalent amount of beer or liquor.

“Were you to drink too much, there is no trickery or home remedies that really work – not salty and fatty foods, rehydration or pickles,” he warned.

“That’s just a scam and racket. There is a huge fake market in that area.”

He furthermore added that the idea that we have more fun when we drink is simply a collective self-deception.

“There’s pretty comprehensive research that shows that it does not get more fun than three glasses.”

Alcohol sales at state monopoly retailer Systembolaget spike around 150 percent of normal levels around Midsummer in comparison to a regular week.