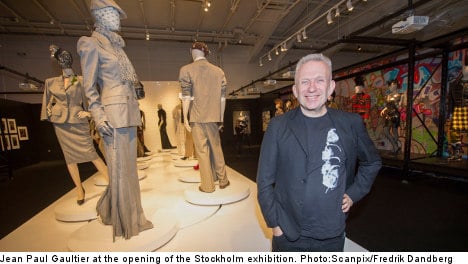 What an honour that Jean Paul Gaultier has taken time out of his hectic schedule to welcome every single visitor to his new exhibition at the Architecture and Design Museum in central Stockholm.

He’s wearing stripes (of course) and talks wistfully about his teddy – his first muse – the tiny stuffed bear on which he first worked a newsprint conical bra (way before Madonna).

It’s not really him, of course, but a talking mannequin superimposed with Jean Paul Gaultier’s face. The words are his though. So is the sentiment.

His teddy was the model on which he designed and created his first fashion piece way back in the fifties.

IN PICTURES: Take a look inside the exhibition

I stood watching the Gaultier figurine for several minutes. Utterly transfixed, like a cat watching a goldfish. I then tore myself away, reluctantly.

They display pieces from Gaultier’s 2007 Virgins collection – where bright celestial prints merged with frothy tulle and lace – and his ecclesiastical A/W 97-98 Couture collection, which featured a full-length velvet cassock.

The models in their heavenly gowns make for an exhibit of biblical proportions (there are 120 mannequins wearing Gaultier designs). But then this is after all, his “biggest show ever”, he has said.

You could be forgiven for thinking on entering the exhibit you’d just walked into some kind of fantastical yet stylized church, but be not afraid, for Gaultier’s is a broad church.

Often described as iconoclastic for his bold use of religious symbolism, and as l’enfant terrible for his daring sexualization of both men and women’s clothes, Gaultier took the idea of gender in fashion and ran with it, in many directions.

Madonna’s now iconic conical corset – from her 1990 Blonde Ambition tour – is one of a small handful displayed behind glass so one can feel free to get up close to the very bones of Gaultier’s creations.

“Wearing them [Gaultier’s corsets] is a personal expression,” says the music and style icon, according to the accompanying placard.

A sense of female empowerment is something Gaultier strived for, and this comes across in the exhibition. The sheer number of women he either befriended or idolized (he counts actresses Catherine Deneuve, Juliette Greco and Micheline Presle as just three of his idols), is testament to his ability to cross genders and create fashion women wanted to wear, despite sometimes raising a few eyebrows.

“It’s not my aim to be provocative. I just try to reflect what I see and feel around me,” reads one of the exhibit’s many Gaultier captions.

An allusion also to Gaultier’s love for other cultures; travel through his collections and it’s not just the Parisian Belle Époque or even the London Punk that catches the designer’s eye.

For a designer denoted, “Frencher than French”; his Return of Print collection from S/S 1984 merged Africa and Europe in clashing motifs; his Chic Rabbis collection from 1990 saw Gaultier turn to Hasidic Jews for inspiration (although some members of the community were not best pleased by his interpretation of their customary clothing). He just found them beautiful we’re told.

It would be easy to get starry-eyed by the alluring costumes Gaultier created for international superstars Kylie Minogue and Madonna or blinded by the powerful images of the body in his nude body-stockings – complete with beaded pubic hair – or eye-popping sadomasochistic creations.

But go behind the spectacle to listen to Gaultier’s story and it’s easier to understand his way of thinking.

Words are just as important image in this exhibition.

Through display tiles, we are told of Gaultier’s relationship with his grandmother and how her corsets became a part of his body-conscious, female empowering psyche early on in his childhood.

In a rolling video and framed still images, we see Gaultier’s love for film and pop culture; his fascination for 1945 film, Falbalas (or Paris Frills), about a dressmaker who seduces his friend’s fiancé, and his love for Querelle, the sailor from the 1982 film of the same name which later became the inspiration for iconic Gaultier’s hyper-sexualized gay mariner.

The modern man, he declared, should have access to the same luxury as women. So came garçons in skirts (in homage to the boys in aprons who served in Parisian cafés), metal codpieces and abs-exposing Breton stripe tees complete with obligatory sailor hat (from his inimitable Boy Toy collection, Men’s prêt-à-porter S/S 1984).

And just as important as any stitch and every sketch is Gaultier’s position on social inclusion.

Gaultier’s is “an inspiring world in which everyone can assert their own identity, unimpeded by discrimination and prejudice,” Lena Rahoult, Director of the Swedish Museum of Architecture, said in a press release.

The designer’s creations reflect his attitude to beauty; beauty he sees in every facet of nationality, gender, religion and physicality.

It is possible to track this message in everything from his first dress, a breast-exposing “Virgin Mary” gown created for Swedish model Aitize Hanson in 1976 to his “Gaulthique” 80s sweaters and underwear as outerwear.

Just be sure not to miss it amongst the constant chatter from talking models and electrifying visuals of the exhibition.

It’s a message worth hearing.

The Fashion World of Jean Paul Gaultier; From the Sidewalk to the Catwalk is open to the public until September 22nd at the Swedish Center for Architecture and Design, Formerly Arkitekturmuseet, Stockholm. Admission is 120 SEK for adults, 100 SEK for students, retired or groups. Free admission for those under the age of 19 and those with a Stockholm Card.