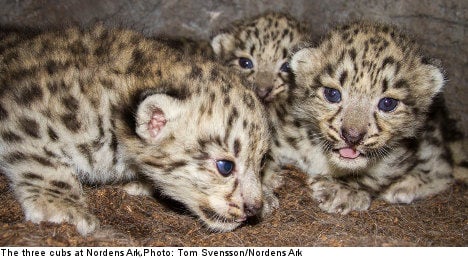 “They are beautiful animals,” Tom Svensson from the Nordens Ark wildlife park told The Local.

“Of course, the staff get very attached to them, but we don’t handle them directly. It’s important to remember they are wild animals.”

The three snow leopard cubs, named Shishir, Sanjic and Shyla, were born in late May and are still too small to leave the den – although the siblings have been spotted playing gently with one another.

“They are very young and are barely walking, but in a few weeks they will be playing around a lot more,” Svensson predicted.

When the female had her first cubs in 2008, Nordens Ark mounted a camera to take unique pictures of the birth. Now, the wildlife charity is showing how the cubs behave in the first days, weeks and months after birth by introducing a live web feed straight from the cub’s lair (watch live feed below).

As well as providing the public with a close-up of the newborns, the live feed will be used by researchers aiming to get a glimpse of how snow leopards act in the wild.

“Our knowledge about snow leopards in the wild is limited; we can’t even say accurately how many there are left in the wild,” Svensson explained.

“They are so specialized; they have to be able to survive extreme winters in Mongolia so their fur is so soft,” he said, adding that an adult snow leopard’s fur coat grows up to five centimetres thick in the winter.

The snow leopard, also known as the Panthera uncia or Uncia uncia is native to the mountain ranges of Central Asia. They have an estimated wild population of 4-7,000, and 600-700 can be found in zoos around the world.

“There is nothing quite like a snow leopard,” Svensson told The Local.

“They have the softest fur of any animal, and I’ve handled a lot of animals.”

Your browser does not support iframes.