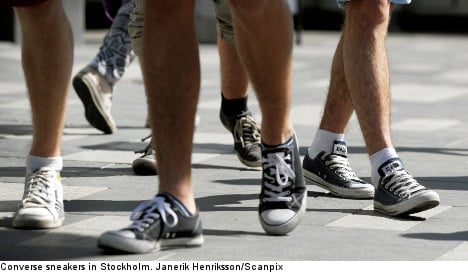 To first illustrate this premise before I move on to the very serious, earth-shattering debate of style sameness – otherwise known as an über trend for its universality and tenacity – let’s focus our attention once more on shoes (I find it’s often the best place to start. Bottoms up I always say).

In the twenties’ US of A, back in the days of jazz, prohibition, gangsters, and basketball, the Converse All-Star was born.

Since then, the popular sneakers have been worn by the inimitable Ramones and achingly cool Nirvana, not to mention being affiliated with one seriously hip-sounding American basketball player called Charles “Chuck” Taylor.

Converse are innately cool. Not avant garde in the least, but easy and cool. Period.

Which is obviously why one day a savvy Swede decided they wanted a pair. Followed by another style-hungry Sweden and another and another and another. Until the country was filled with so many canvas pumps that wardrobes could no longer contain them… Swedes turned to the forests to hoard their stashes of sneakers and lakes and rivers overflowed with misplaced All-Stars.

I once told a Swedish girl that I loved Swedish fashion, “Why? It’s so boring,” she exclaimed with what I can only describe as utter repugnance. I stuttered.

I say thank heavens Stockholm guys in particular aren’t afraid of a bit of colour; a man in a pair of yellow trousers striding down the street always raises a smile – and what’s wrong with looking smart?

IN PICTURES: See what some well-dressed Stockholmers had to say about sameness in Sweden

Sameness, uniformity can be great. Here’s another case in point: peacocks.

All male peacocks sport the same blue-green fan tail, an electric, iridescent blue plumage, and those little feathers that look like eyes. They’re dazzling. If male peacocks had the brain power to think about fashioning their feathers another way, would they?

I don’t think so. They still always get the girl, right?

Imitation is the greatest form of flattery or so they say. So if something looks good, why not copy it? We all do it to some extent.

For me, it’s quite often make-up envy. I’ll spot a girl wearing a totally rad colour lipstick while I’m walking to the bus stop or day-dreaming about becoming a rock goddess as I’m drinking tea, and have to have it.

Swedish sameness is just this, just a little mellow and on a bumper scale. Why not wear the same as everybody else? If anything, Swedes seem to catch onto a trend and stick with what they know works. They find good, solid, stylish pieces and wear them to death.

There’s also nothing wrong with standing out. Shocking people every once in a while.

The Midsummer flowers in your hair thing, for example. That’s not boring. It’s whimsical – granted you do it every year – but still it is fun, frivolous, totally superfluous and all the more alluring because of it.

I say, stick a feather in your cap Swedes and embrace frivolity.

IN PICTURES: Six ways to dress like a Swede – revealed