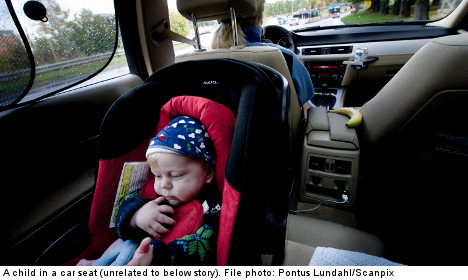 The parents in the southern Swedish town of Helsingborg left their child in their car after arriving at a local shopping centre.

The baby’s plight did not, however, go unnoticed, as worried passers-by called the police. Before the law enforcers arrived, one bystander managed to pry open the window, as it had not been fully closed by the parents.

The infant did not have any visible damages from being left alone but the incident was reported to the police, according to the local Helsingsborgs Dagblad (HD) newspaper.

The police have now opened an investigation to determine whether the parents put the child at risk, but any potential prosecution could be upgraded to causing bodily harm if it can be proved the child was hurt in the incident.

It is the second case of parents leaving a child in their car unattended in Sweden in recent months. In May, a father forgot his son in the back of his car after failing to drop him off at day care. The father instead went to work.

The boy spent eight hours in the car before being discovered.

“It’s a young couple, a completely typical family, where the mother usually does the day-care drop-off. But on this day, the father did it. He’s not in the habit of doing it,” chief prosecutor Mats Svensson told the Expressen newspaper about the case in Eslöv, southern Sweden.

STATISTICS
These are Sweden’s most popular baby names