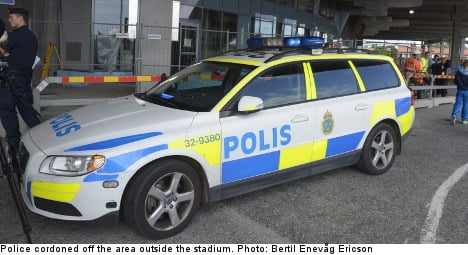 “We have the power to decide who gets to play there, and if there is no order then that power will be exercised,” Madelein Sjöstedt, Stockholm’s deputy mayor of culture and real estate, told the Aftonbladet daily.

A football match featuring a veterans team from Stockholm club Djurgården at the newly built Tele2 arena was called off on Thursday after police found an explosive device.

The explosives were found in connection with a veterans match at the new arena involving Djurgården. Police have classified the case as attempted murder.

Djurgården held a crisis meeting on Friday with the police and rivals Hammarby.

According to a report in the Aftonbladet daily the bomb could have links to the match and the issue of which club should have the formal right to open the stadium.

“We are not naive, we knew that there were strong emotions over us playing at the stadium,” said Gunnar Gidefeldt at Djurgården to the newspaper on Friday.

The official opening of the stadium is slated for August 24th with a concert featuring Kent, Robyn and Lars Winnerbäck. However several football matches have been scheduled for the première week 20-27th July.

Hammarby is due to be first up hosting Örgryte, followed by Djurgården against Norrköping a day later.