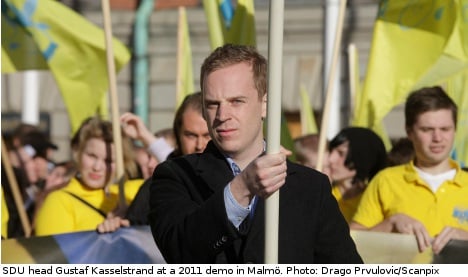 The police were out in force to monitor the event which is begins on Sunday evening.

SDU is hosting a debate on Sunday entitled “The youth and the nation in Europe in the 2010s” featuring youth Politicians from Ring Freiheitlicher Jugend (Austria), Front National de la Jeunesse (France) and the Vlaams Belang Jongeren (Belgium).

“We share their ideas and want to show that we are part of a larger movement. It is with pride we take them to Gotland,” said Gustav Kasselstrand, chairman of SDU, to the Gotlands Allehanda daily.

According to political scientist Andreas Johansson Heinö at Gothenburg University the invited youth associations all have extreme racist roots.

“National Front is clearly racist and the Sweden Democrats (SD) have previously classified them as too radical.”

Johansson Heinö described Freiheitlicher Jugend as anti-immigration with anti-Islam policies and considers the Belgian Vlaams Belang Jongeren to be reminiscent of the National Front.

The Sweden Democrats have however rejected the associations.

“You people in the media have to start to make a distinction between meeting people and having the exact same views. It’s not the same,” he said.

When asked whether the Sweden Democrats have input in the speakers invited by SDU to Almedalen, Bylund replied:

For the duration of Almedalen week police resources have been reinforced by 60 officers deployed from Stockholm to ensure order.

“We have cooperated with SDU throughout the spring to coordinate this so that there will be no surprises,” said Ola Österling at Stockholm police to Gotland Allehanda.

According to Österling, the police focus will be more on any counter-demonstrators than in those holding police permits.