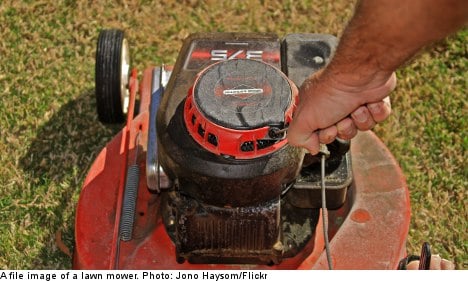 “No one saw the actual incident, so no one knows exactly what happened. But he has ended up under his lawn mower and passed away,” Bo Sandström of the Södra Älvsborg emergency services told the Aftonbladet newspaper.

Emergency services were notified late in the afternoon when a neighbour found the man stuck under the mower. It remains unclear exactly what caused his death, though neighbours have indicated that the 91-year-old used the mower to help him get around.

“We have information that the man had difficulty walking and had previously used the lawn mower to collect the mail,” officer Roland Offesson at nearby Borås told the Borås Tidning (BT) newspaper.

Neighbours said the deceased man was, however, lively for his age.

“How terrible. It’s horrible,” neighbour Staffan Häldebring, who lived just two houses from the neighbour for the past 46 years, told Aftonbladet.

“He was really pleasant, very energetic for his age, and always took care of his garden by himself throughout the years.”

The man had no children, and his family has been notified of his death.