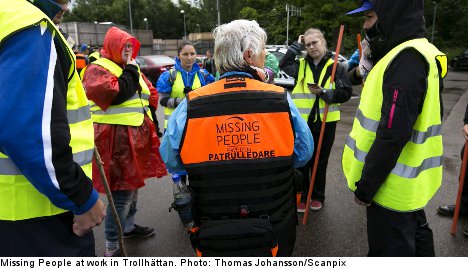 The man is an acquaintance of the woman and has previous contact with the police. The man denies all suspicions directed against him.

“We will now check the information which the man has submitted in interviews and we will continue with the investigation. We are in the process of putting the puzzle together and are primarily focused on finding the missing woman,” said Eva Johnsson at Uddevalla police in a statement.

The search for the missing woman has now been extended to include countryside in the vicinity of Hunneberg north of Trollhättan.

The police on Tuesday found some items of clothing and a backpack which was deemed of interest to the investigation.

The police will examine the items during the course of Wednesday and continue to interview several friends and acquaintances in order to get a better idea of the woman’s movements prior to her disappearance.

Around 200 volunteers from the Missing People organization joined the search on Tuesday. Renewed attempts to find the woman will be made at 5pm on Wednesday.

“It is positive that so many volunteers are involved in the search party,” said Kenneth Söderlund of Missing People.