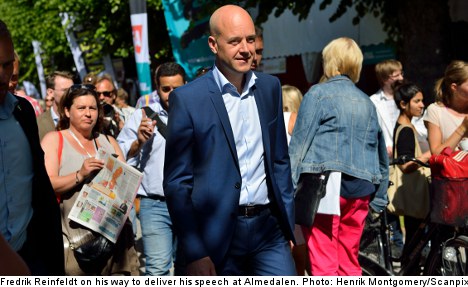 The news that 32,000 kronor ($4,800) was deemed prohibitive for Reinfeldt’s party to spend might lead one to the conclusion that if the prime minister can’t stay at Almedalen then perhaps something has gone a little awry. It is a political week after all.

But in fact it doesn’t really matter. Sure the crowds descend on the main stage at 7pm to hear the headline speech of the day, but much of the business carries on regardless, and elsewhere.

Democratic politics is so much more than government, parliament, and elections every few years. It is dialogue, it is the exchange of ideas, it is having the resilience to advocate a point of view and having the patience to listen to another.

While the Hotel Wisby seeks to cash in on its Almedalen bonanza, Visby residents fill their front rooms with mattresses to house the less well-heeled, but no less politically engaged.

Almedalen political week can be dismissed as a media gimmick and to an extent it is. Politicians push their agendas, PR companies compete for access, academics polish their images, journalists compete for exposure, and companies sell their wares.

But behind this glossy high-rolling façade there is a very real grassroots action at work, with a commitment to learning and to political change.

At one seminar today journalist and writer Lina Andersson could be heard arguing that religion is no more or less important than any other point of view or interest and shouldn’t be afforded any special status.

Religion is in many ways like party politics – you typically join one club, you defend that club while you are member, and then you criticize the club if you find cause to leave.

Almedalen week offers the public, participants, and observers the chance to visit each other’s clubs and stick around for a while, if only for research purposes. And many are prepared to sleep on the floor to do it.

In an age of political spin and soundbite, policed by the caustic arena of the Twittersphere, this a real virtue and renders Almedalen a Swedish concept that is surely ripe for export.