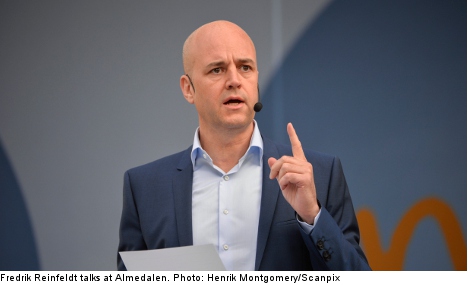 “They want to divide us as a people and stoke suspicion,” he said.

Reinfeldt didn’t mention the Sweden Democrats by name, calling them “the Eighth Party”, which “should not be included”.

“Our answer is: You shall not have any influence,” he said, raising his voice.

Reinfeldt then proceeded to criticize Social Democrat Stefan Löfven for not being clear on the issue of SD, but reserved praise for former leader Mona Sahlin’s position.

The prime minister proceeded to attack the red-green opposition parties and accused them of being sufficiently prepared to take power.

“These are new times, you need to prepare yourselves with others,” he said referring to the lack of a joint platform among the opposition parties.

Reinfeldt conceded that the Moderates’ support of 30 percent of the electorate is not sufficient to demand power alone.

The Moderate party leader observed that the election result is far from determined, despite recent declines in the opinion polls.

“Let us fight to win back people’s confidence, let us show that we are worth a new election victory,” he said.