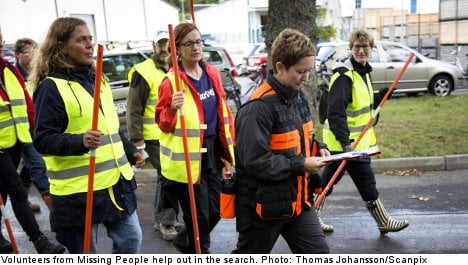 The woman has been missing since Sunday, when she was last seen in Trollhättan, roughly 75 kilometres north of Gothenburg.

On Wednesday, a 35-year-old man was arrested on suspicion of having kidnapped the mother of two, although he has denied any involvement.

Police on Thursday increased their hunt for the woman, sending divers to lakes and storm drains in the countryside in the vicinity of Hunneberg, north of Trollhättan.

“We are doing a thorough search up there on the mountain and if you’re going to do it, you should do it properly,” Sten Rune Timmersjö of the local police told the TT news agency.

In Hunneberg, roughly ten kilometres from Trollhättan, clothes and a backpack were found, which have been sent in for analysis. A burnt out car was also discovered in the area. It remains unclear if the car or the clothes have any connection to the case, but investigators are looking into both.

Police have concluded that no murder could have occurred in the woman’s apartment.

Around 200 volunteers from the Missing People organization have also joined the search party.