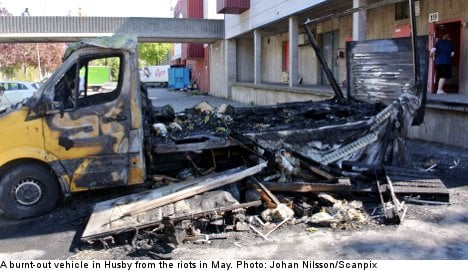 The man was sentenced on Thursday to six months in prison for aggravated vandalism after he set two cars on fire in late May.

He was also convicted of making illegal threats, unlawful driving, drunk driving, and drug crimes, according to Sveriges Radio (SR).

The convicted man was previously known by police and was on probation at the time of the attacks, which took place in the second half of May this year.

The unrest, which began in Husby and spread to other Stockholm suburbs, was believed to have been sparked by the killing of a 69-year-old machete-wielding man by police officers.

An estimated 100 cars were torched on the first night of the attacks, and the week of unrest that ensured left store windows smashed and schools scorched. Police officers and fire fighters were also pelted with stones on several occasions.

While the following nights of unrest were not as severe as the first, the continued violence and vandalism attracted the attention of the world media, and raised questions about segregation problems between Stockholm’s inner and outer suburbs.