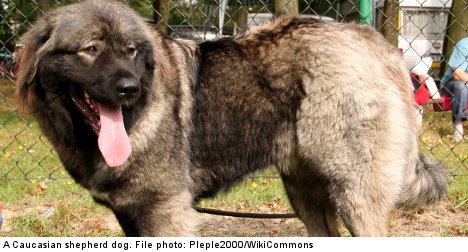 “We needed dental records to identify the body – about a third was gone,” Tommy Johannesson of the Kinna police told The Local.

The body of the deceased man, who lived in Kinna, south east of Gothenburg, was discovered on Friday, and had likely been there for two weeks, according to police.

A friend of the man had reported him missing after he had tried to visit the house but couldn’t get in, alerting officers to the fact that the dogs were loose inside.

Officers who headed to the scene reported a horrific stench coming from the home, and found the man’s body had been mangled by the dogs.

“We went in to the house and found him dead on the kitchen floor. We were forced to shoot and kill the dogs to get inside, they were protecting their prey,” Johannesson told The Local.

The dogs, which can grow to be 90 kilogrammes and are often used to hunt bears, had eaten enough of the body to leave it unrecognizable, according to Johannesson.

“These kinds of dogs are quite aggressive and dangerous,” he added.

It remains unknown whether the dogs were responsible for the man’s death, but a coroner’s report has ruled out the possibility of murder. The man is believed to have died of natural causes.

The breed of dog, which is uncommon in Sweden, is strong muscled, big boned, and measure around 70 centimetres tall.