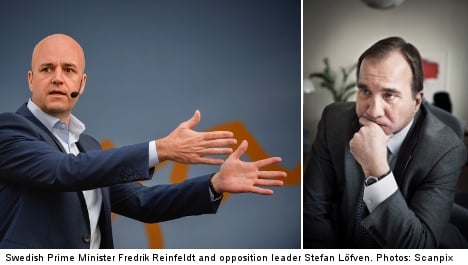 “Reinfeldt is the one who is embarrassing,” countered Social Democrat leader Stefan Lövfen, retorting the prime minister’s accusation that the opposition’s “mumbling” about the Sweden Democrats was embarrassing.

On the Moderate Party’s day at the political conference Almedalen, party leader Reinfeldt chose to take a swipe at the opposition. He accused the Social Democrats of not working hard enough in the debate against the ideas of the immigration-critical Sweden Democrat party.

Löfven, for his part, said Reinfeldt’s accusation was groundless.

“He’s bluffing. I have been very clear when it comes to the Sweden Democrats,” Löfven told the TT news agency on Friday.

“I’m the one who said that we had to make sure the Sweden Democrats did not become king makers in the Swedish parliament.”

The prime minister and Moderate Party leader argued this week that former Social Democrat leader Mona Sahlin had been clearer than Löfven in talking about the need to work against the Sweden Democrats, whom many Swedes consider racist.

Löfven countered by accusing Reinfeldt of playing with block politics, when the current centre-right government has enjoyed the support of the minority party the Sweden Democrats to push through much legislation.

“We have a very weak government that doesn’t deliver any policy suggestions, and in eight of ten cases they have the support of the Sweden Democrats,” Löfven said.

“And that’s the system that Reinfeldt wants to have again, but that is not what we think.”

In matters of migration, however, Reinfeldt’s government works with the Green Party as a one-police-area ally, in order to exclude the Sweden Democrats from decision-making about migrants and migrants’ rights.

Sweden goes to the polls next year in general elections.