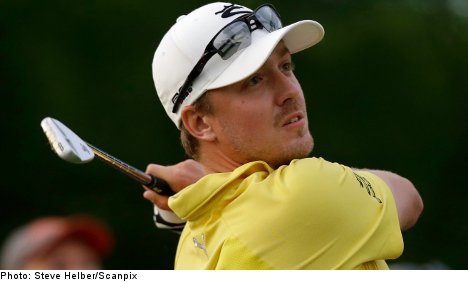 In a final round that was halted for more than three hours by a thunderstorm and ended in twilight gloom, Blixt fired a three-under par 67 for the third day in a row to finish on 13-under 267, his first top-10 PGA Tour finish of the year.

“It has been a bad year for me but I just pulled it off,” a tearful Blixt said. “I can’t believe it. I’m just really happy.”

Blixt, whose only prior PGA victory came at last year’s Frys.com Open, won the $1.13 million top prize and clinched a berth in next year’s Masters, a huge feat for a golfer who has never played in a major championship.

“A dream come true,” Blixt said. “I watched (the Masters) when I was a kid. I always wanted to play there. It’s a special place, almost like a religious experience to be there. To play there, I’ve just got no words for it.”

“It’s so many dreams come true. It’s one week and the whole year turns around. It’s really special.”

Jimmy Walker shared second on 269. The Aussies both fired 68s while Walker shot 71 and Wagner fired a 73, but none could catch Blixt over the final holes.

“I pulled off some really good shots and had some birdie putts I can make,” Blixt said. “It felt awesome. I had my A-game. I got a lot of good breaks.”

An afternoon thunderstorm stopped play for three hours and ten minutes and rain continued to drench the 7,287-yard layout even after golfers returned to the course.

Blixt rose to the challenge with a nine-foot birdie putt at the 16th, celebrating with a fist pump, and when Wagner took a bogey at the par-three 15th moments later after finding a bunker off the tee, Blixt led by two strokes.

Jones made a birdie at the par-five 17th to pull within two shots but Blixt parred his way to the clubhouse, the key shot a 45-foot putt over a ridge at the par-three 18th that stopped a foot from the cup.

Wagner and Walker both reached the 17th green needing a birdie-birdie finish to force a playoff, but both settled for pars and when they failed to ace the final hole, Blixt’s title was assured.

Walker, seeking his first Tour title, settled for his best PGA Tour finish, improving on his share of third place from this year at Pebble Beach.