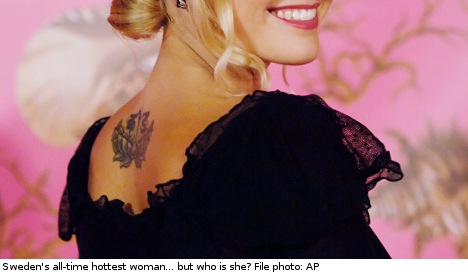 It’s a tough job but somebody has got to do it.

Let’s face it, Swedish women are regarded as the Rolls Royce of the female species. Mention that you’ve bagged one of these Scandinavian hotties as a girlfriend/wife/lover to a non-Swede and you’ll likely be met with approving nods and mutterings of “how the hell did he land her?”

IN PICTURES: Click on to partake of Patrick’s selection of Sweden’s top-ten hottest women

Yes, Swedish women are an elusive catch renowned for their blonde hair and legs up their armpits. But beyond the cliché of the the fair-skinned Swede, there are numerous other examples of beautiful Nordic ladies, who are anything but the stereotype associated with my adopted country.

So behold The Local’s top-ten of Sweden’s hottest women. Looks are just one requirement for making this list, which is a reflection of the modern Swedish kvinna. We’ve factored in traits like intelligence, attitude and the rest when reaching our conclusion. Enjoy!