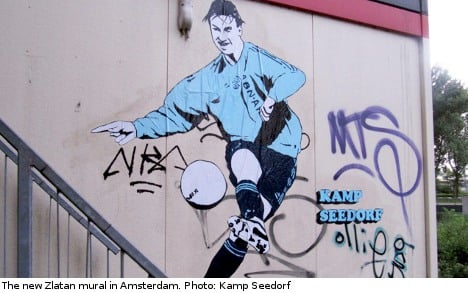 The work of art was carried out by Kamp Seedorf, a street art group in the Netherlands. Zlatan is the latest in a long line of Ajax heroes to be honoured by the artists after previous works of Marco van Basten, Frank Rijkaard and Clarence Seedorf.

“Our works are (illegal) street pieces of our favourite football players. We like the eccentric players like Zlatan so it was an easy decision to create one of him,” artist Clyde told The Local.

The graffiti is painted on the side of of a childcare centre in the east of Amsterdam.

“It was already full of graffiti so we figured it was good enough for us. The location is great in Amsterdam as trams and passing cars can see the it,” said Clyde.

Zlatan moved from hometown club Malmö FF to Ajax in 2001 and went on to win two Eredivisie titles with the Amsterdam giants. He is fondly remembered for netting a remarkable goal against NAC Breda in 2004, when he dribbled past several players and scored.

“When Zlatan came to Ajax opinions were mixed but he proved himself. Everybody is now very proud that he played for the club and we love him as a footballer and as a person. He remains a hero,” added Clyde.

Since leaving the Dutch club in 2004 Ibrahimovic has starred for Juventus, Inter, Barcelona, Milan and Paris Saint-Germain. He’s won league titles with them all (ten) and has recently been linked with another big money move to Real Madrid.