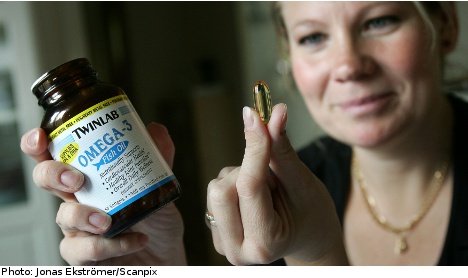 “We found a clear link between a child’s composition of fatty acids and allergy,” Ann-Sofie Sandberg, one of the researchers behind the study, told the Dagens Nyheter (DN) daily.

The study, a cooperation between Chalmers University of Technology, the Sahlgrenska Academy and Umeå University, is based on blood taken from the umbilical cords of 129 children born in Östersund in northern Sweden 1996-1997.

The blood samples have then been compared with allergy tests taken on the children up to the age of thirteen.

Some 48 of the children showed no signs of allergies during their upbringing while 44 had respiratory conditions and 37 had allergic eczema.

The study showed that the children who suffered from allergies at age 13 had a higher proportion of polyunsaturated fats in their blood at birth than those who did not develop allergies.

Children who were allergy-free during their early years were however found to have a higher percentage of mono-unsaturated fat, the study showed.

The conclusion has been drawn that omega 3 fatty acids are behind the development and Ann-Sofie Sandberg warned against the addition of the acids in milk replacement products and in the diet of pregnant women.

“I don’t want discourage the diet (including fatty fish), but from diet additives with omega 3,” she told DN.

Sandberg explained that the study doesn’t apply to adults as allergies are determined by the months of pregnancy and the child’s first years. She also underlined that omega 3 additives can be useful later in life to cut the risk of heart disease.

The study has been published in the academic journal PLOS One.