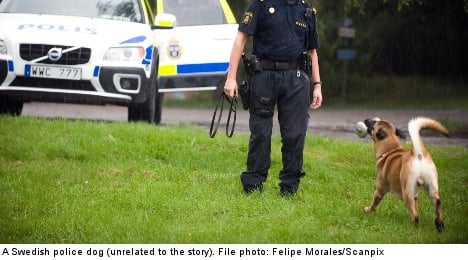 "The only thing I can say is that this video gives cause to assume that the police officer has committed a crime," internal affairs prosecutor Mats Åhlund told the Dagens Nyheter (DN) newspaper after being shown a clip of the altercation that took place late on Thursday night.

"This has to investigated properly so we understand what happened before and after, but it's clear as day that there is reason to suspect that a crime took place."

The video shows a drunk man squabbling with the police officer, who has a police dog at her side. Poor audio quality makes it difficult to pick up the entire exchange, filmed by a third party, but the dog at one point leaps towards the man who in return grabs the animal by its collar.

As the man stumbles across the road with his arm outstretched, seemingly to keep the animal at bay, the policewoman takes out her baton and begins striking him while repeatedly ordering him to lie down in the street.

Once he fell to his knees, she orders the dog to sit, which it does straight away, at which point the officer puts her baton away.

A friend of the man intervenes at that point to check on the battered man on the ground, while the policewoman spokes into her radio and is heard telling command that the man threatened to "blow up the street".

"I didn't say that I would blow up the street, I said someone would," the victim was heard muttering in the video clip on the DN website, before yelling.

"Are you totally stupid or what?"

If the incident leads to charges being brought against the policewoman, she would risk a reprimand and losing her job.

"She shouldn't be a police officer unless there is some very extenuating circumstances," he said, saying the video left him "very, very upset".

"She has a dog, she has a baton, and he's not being violent. You never know, something else may have happened, but I have a hard time imagining what could justify this."