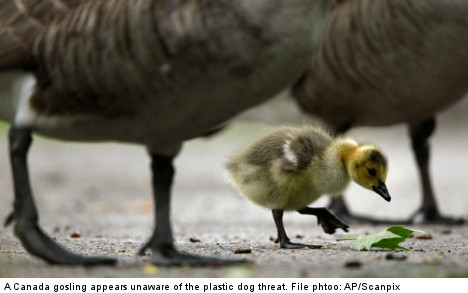 The mail order shepherds, which retail at $60 (400 kronor) each from an American website, have been causing a stir by attempting to scare the geese in local parks.

One Sollentuna resident, however, has not been swayed by the cut out shepherd dogs’ successes so far.

“When I saw the geese running around them in the park I thought it was comical. It didn’t work out so well,” local Andrea Näsman told the Aftonbladet newspaper.

“Instead, when a lady arrived with a chihuahua the geese got the fright of their life,” he added.

Sollentuna’s new geese police were purchased from an American company called “Watch dog goose patrol.” The plastic beasts don’t need to be fed or walked and according to the website “dogs last for 3+ years”.

“The geese see the dogs as a threat and will not come back as long as the dog silhouettes are in place. Geese don’t like dogs,” reads the advertising text for the Minnesota-based company.

It’s the latest attempt by officials to tackle the ever-increasing population of Canada and Barnacle geese in Solletuna. Recently, the county administrative board gave the green light to shoot 15 geese this year.

Hordes of geese have been causing havoc at the local Edsbergsparken and the swimming area on the promenade.

“We will work with park management and conservationists to discuss which solution is best and find an alternative to hunting,” said nature conservation manager Rikard Dahlén to local newspaper Vi i Sollentuna

The dogs, meanwhile, will have to suffice as a temporary solution. Politician Thorwald Larsson who sits on the local municipality committee said the plastic option was “not a political project”.

“This is an idea from the officials to tackle the problem so they’ve been flown over from America. I thought it would be cheaper to make them ourselves but they apparently don’t cost that much.”

The Local contacted the manufacturers of the plastic dogs in the USA but they were unavailable for comment.