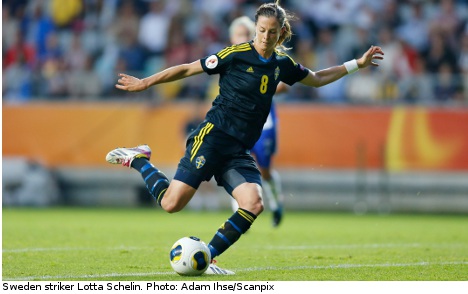 “Now we are going to enjoy this and look forward to the Italy match,” said centre back Nilla Fischer who added two goals to the one she scored against Denmark.

Fischer opened Sweden’s account in the 15 minute when she met Marie Hammarström’s corner at the near post. She followed up with a second from another corner in the 36th minute, collecting the rebound after an acrobatic volley from striker Kosovare Asllani.

“It was great that we got some reward from set plays,” she told broadcaster TV4 after the match.

Asllani turned from provider to goal-getter in the 38th minute, meeting a perfect cross from winger Sofia Jakobsson.

The Swedes went into the half-time break 3-0 up and the full house at Gothenburg’s Gamla Ullevi stadium was raising the roof with a crescendo of noise.

On the hour the crowd was chanting the name of Lyon star and team captian Lotta Schelin after she thrashed in number four following a sublime defence-splitting pass from Asllani.

Finland were down and out at this stage of the match and Sweden could afford to make a few changes to rest their stars ahead of the final Group A game against Italy on Tuesday.

But there will still time for Schelin’s coup de grâce in the 87th minute, glancing in a header from a Sara Thunebro free kick.

Schelin expressed satisfaction after the match and dismissed the sexist backlash that the team had been subjected to from some quarters after the opening day 1-1 draw with Denmark.

“Those comments come from people who are bitter over life in general, so I don’t know if they will be that much happier about this. Extremists are nothing I waste any energy on,” she said to the Expressen daily.

In the other Group A game Italy beat Denmark 2-1 leaving Sweden firmly in control of their destiny ahead of Tuesday’s match in Halmstad.