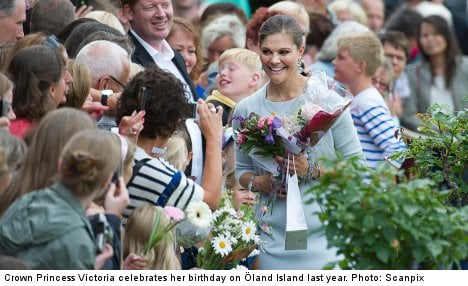 Several hundred people have made their way to Solliden for the traditional annual celebrations for the popular princess. Many visitors are prepared for a long wait to catch a glimpse of Victoria, setting up camp with chairs and snacks.

The Berglund sisters from Frillesas outside Kungsbacka have been preparing their trip for weeks, according to their mother Åsa Berglund.

“The girls have cut and pasted large paper hearts in pink as they want to give Victoria a gift. Three-year Emma has thought about what she would say to Victoria,” Berglund said.

The big question among those waiting is whether Victoria’s daughter Princess Estelle will put in an appearance. The Royal Court has decided to hold that information to themselves.

The royal family traditionally spends their summers at the Solliden Palace and Victoria typically dresses up in a traditional folk dress to receive well-wishers.

Sunday evening’s tribute concert is expected to generate a record crowd. Among the artists who will perform are Darin, Robin Stjernberg, Emmelie de Forest and Louise Hoffsten.