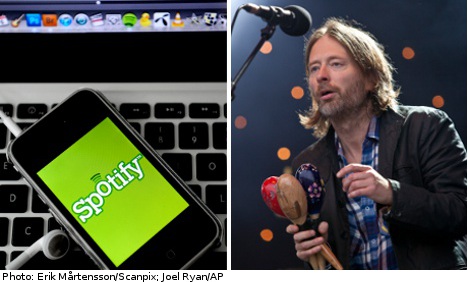 Yorke announced via Twitter on Sunday that he had withdrawn from Spotify his solo songs and those of his band Atoms for Peace, explaining that the move was motivated by “standing up for our fellow musicians”.

“Make no mistake, new artists you discover on Spotify will not get paid. Meanwhile shareholders will shortly be rolling in it. Simple,” Yorke said via Twitter.

“Spotify’s goal is to grow a service which people love… and which will provide the financial support to the music industry necessary to invest in new talent and music. We want to help artists connect with their fans, find new audiences, grow their fan base and make a living from the music,” she told The Local.

Yorke is not the first artist to complain over the revenues generated for artists through Spotify and other streaming services, with bands such as Led Zeppelin, Bob Dylan and Prince refusing to open up their music catalogues.

Swedish rocker Magnus Uggla grabbed headlines a few years back when he described the firm as “the new pirates”, claiming that his “songs are being given away”. Spotify however on Monday rejected the suggestion that the money generated by the service was negligible.

“We’ve already paid $500 million to rightsholders so far and by the end of 2013 this number will reach $1 billion. Much of this money is being invested in nurturing new talent and producing great new music.”

Uggla, who is one of Sweden most prolific artists, professed that he liked the idea of Spotify, directing much of his ire at Sony Music, which had recently acquired a stake. This was a theme taken up by Radiohead producer Nigel Godrich in support of Yorke’s stance.

“The music industry is being taken over by the back door… Make no mistake. These are all the same old industry bods trying to get a stranglehold on the delivery system,” Godrich wrote via Twitter.

Song BMG, EMI, Universal Music and Warner Music all hold minority stakes in Spotify, which was started by Daniel EK and Martin Lorentzon in 2006. The pair continue to own significant shareholdings.

Sofie Grant insisted on Monday that the Spotify “project” remained in its early stages.

“We’re 100 percent committed to making Spotify the most artist-friendly music service possible and are constantly talking to artists and managers about how Spotify can help build their careers.”