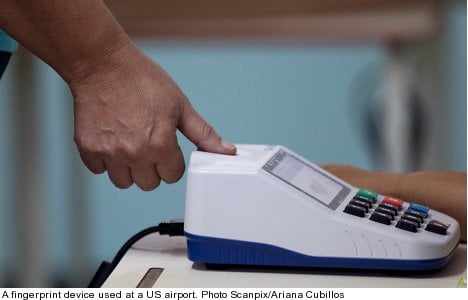 The law will enable US agencies easy access to fingerprint records of Swedes. The agreement is reciprocal and intended to increase cooperation between the two countries with respect to criminal investigations, such as terrorism.

Law professor Dennis Töllberg considers the framework for the exchange of information to be balanced but he argued that Sweden’s weak controls and lackof expertise could pose problems.

“The United States will get what they want without someone here putting a stop to it. That will not be the case when we want something from them,” he said.

Töllberg furthermore added that the agreement could have consequences for Swedes travelling to the United States.

“They could then refused admission and denied a work visa. There is no way to appeal against Sweden disclosing information and each country decides for itself who they wish to let in,” he said.

“It could change someone’s life not being able to enter a country, based on a suspicion that may have been wrong.”

The agreement is in place and, following a consultative process in the autumn, will be presented to Sweden’s Riksdag for legislative approval.

While fingerprint information will be readily accessible, identities will only be released in response to a formal request from either side. Both Sweden and the US remain free to disclose any further information that they see fit.

Swedish and US law respectively will determine the content of the information released. The agreement has been designed to assist in crimes such as terrorism that carry a penalty of at least one year imprisonment in either country.

The proposed law names the National Police Board (Rikspolisstyrelsen) as the Swedish authority responsible for accessing the US database. Authorities such as the Security Service (Säpo), the National Bureau of Investigation (Rikskriminalen), the Economic Crime Authority (Ekobrottsmyndigheten) and Swedish Customs will be able to request information.

The agreement also paves the way for further agreements on a similar exchange of information contained in the DNA registry.