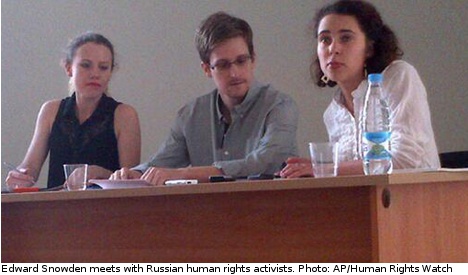 “Respectfully, I say to Sweden, ‘America has done wrong in this instance. Stand up to her. Grant Edward Snowden asylum,” Humphrey, who represented New Hampshire in the Senate for 12 years and served on the Foreign Relations, Armed Services and Judiciary Committees, wrote in an email to the US newspaper Politico.

Snowden remains in the transit area of Moscow’s Sheremetyevo airport since arriving on a flight from Hong Kong in late June. He is reported to have applied for refuge in some 20 countries, although Sweden is not among them.

Humphrey however identified Sweden is a suitable destination for the 30-year-old former technical contractor for the United States National Security Agency (NSA) as it is only a short flight from Moscow.

“No overflight is necessary of countries likely to cooperate with the U.S. in forcing down an aircraft carrying Mr. Snowden to asylum,” he added in an apparent reference to Bolivian president Evo Morales whose flight was diverted to Austria in early July.

Humphrey conceded furthermore that Sweden is generally regarded as an ally of the US, while pointing out that the country “is firm in its determination to act independently”.

Humphrey grabbed the global headlines earlier in the week after an email exchange between him and Snowden was made public by the UK Guardian newspaper.

“I believe you have done the right thing in exposing what I regard as massive violation of the United States Constitution,” Humphrey told Snowden, who is wanted by the US on suspicion of espionage charges as a result of his revelations.

In correspondence with the Guardian journalist Glenn Greenwald, Humphrey described Snowden as “a courageous whistleblower”.

Humphrey told Politico that he plans to enlist the help of former Senate colleagues to push for “Sweden and other western countries to stand up to Washington and grant Mr. Snowden asylum”.

Edward Snowden remains in diplomatic limbo in Moscow. He has been offered refuge in at least three Latin American countries and has recently applied for temporary asylum in Russia.