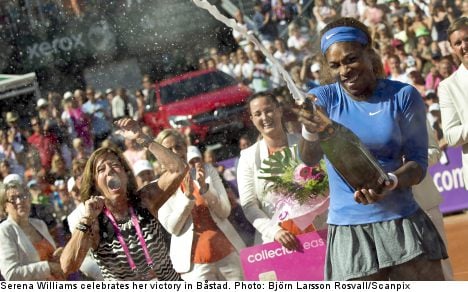 Williams showed little mercy as she swept to a 6-4, 6-1 victory to take the 53rd WTA title of her career.

Larsson, 24, ranked 76th in the world, had no answer to the Williams arsenal and her third WTA final went the way of the previous two, ending in defeat.

French Open winner Williams, 31, was contesting her 69th final and is unbeaten on clay this season, having also won in Rome, Madrid and Charleston.

Previously, the most WTA main draw match wins Williams had at this stage of the year was 38, back in 2003.

“Johanna played well, and I made a lot of unforced errors in the beginning – I just hit everything out,” Williams said whose career titles now match those achieved by Monica Seles.

“I had to kind of come back and do a little better. You just have to stay positive. I wasn’t playing well at Wimbledon when I lost, so I thought, ‘Okay, just remember what I did wrong there, and don’t make the same mistake here.’ I really wanted to do better here in Båstad this week.”

Williams had words of comfort for Larsson.

“I wasn’t surprised to see her playing so well,” the world number one said.

“I thought she played well at Fed Cup – I’m really glad I got a chance to play her there. And you can see her game improving and getting better and better.”