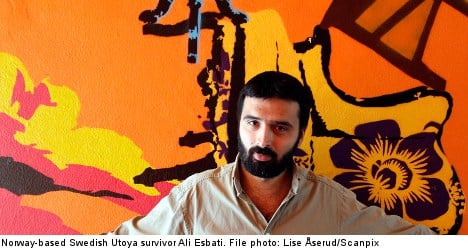 While Norway has put the terrorist Anders Behring Breivik behind bars, think tank researcher Ali Esbati noted in an op-ed in the Swedish leftleaning tabloid Aftonbladet that one of Breivik’s main inspirations, the Norwegian blogger Peder Nøstvold Jensen, who uses the online soubriquet Fjordman, recently received a 75,000 kroner ($12,600) scholarship to write a book.

While the ensuing debate about Jensen soon becoming an author had centred on freedom of speech, Esbait argued that several commentators seemed not to understand the ramifications of legitimizing his far-right views.

“They hold positions from which public debate can be treated like a racy board game, rather than an arena where real life conditions are at stake,” Esbati wrote. “An arena where there is a constant tug of war about where the demarcation lines of what is acceptable should be defined, not legally but socially.”

“Two years after the terror attacks, it is clear that Norwegian society has not been able to process the events. Instead, the attacks’ very atrociousness has made it more difficult to counteract islamophobia and ultra-reactionary advances,” argued Esbati, who survived the shooting spree on the island of Utoya two years ago, when Breivik killed 69 people after killing eight others with a bomb in Oslo’s government quarters. Esbati attended the memorial service at Oslo Cathedral on Monday, at one point hiding his face in his hands as though overcome by emotion.

“People reason that everyday racism is miles apart from Breivik’s mass murder,” he continued in his op-ed, in which he asked that Norwegians make more of an effort to put the terror attacks in their political context.

Esbati claimed that debate about a “mass invasion of beggars”, in which rumours swept Oslo after migrants from European countries travelled to Norway to beg for money last summer, showed that everyday racism still abounded.

“Oslo municipality issued rules against people sleeping in parks and by the roadside, which in practice was a ban aimed directly at the Roma,” Esbati argued. “These signals from above gain strength, as always, from comments fields and social media, where you can read about vermin and the need to clean up and discharge people.”

“The debate is influenced by the fact that the rightwing populist Fremskrittspartiet (FRP) is big and well established today, which gives its views an immediate stamp of being popular and normal,” Esbati wrote, noting that the party’s approval rating had reached 20 percent in recent opinion polls and that the party has struck a deal with conservative opposition party Høyre to form a government after September’s general elections if the Labour Party loses.

“One of FRP’s most prominent MPs is Christian Tybring-Gjedde. The summer before the Utøya terror he wrote a long accusation letter against the Labour Party, asking why it had decided to replace Norwegian culture with multiculturalism, a miniature UN. He wrote about stabbing Norway’s own culture in the back, and how he’d never be part of it,” Esbati elaborated.

While Norwegian commentators at the time of the attacks noted that there where parallels in Tybring-Gjedde’s and Breivik’s rhetoric, the former is back in “full swing”, Esbati continued.

“When he’s not giving insinuating tips to Muslim parents about how to raise their children or broadcasting warnings that Oslo will soon have a non-Western majority population, he writes articles about how journalists ignoring the price tag of high immigration, which will be paid by their children instead,” Esbati said.