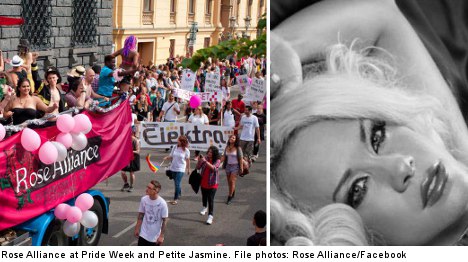 Eva-Marree, a 27-year-old sex worker also known as Petite Jasmine, lost custody of her two children to her ex-boyfriend, 31, in a district court last year. She was stabbed to death last Thursday when she went to see her children after her ex brought a knife with him to the handover.

Now, sex activists around the world have united in an attempt to shed light on the stigmas attached to sex workers.

“I’ve never seen a murder have such an affect on the community,” said Pye Jacobsson, a co-ordinator for Rose Alliance, which works for prostitutes’ rights across the world.

Many of the sex workers, including 24-year sex work veteran Jacobsson, are critical of keeping prostitution illegal. Sweden, which outlawed the purchase rather than the sale of sex fifteen years ago, has come under intense scrutiny for its legislation. While some observers have said it is ground-breaking in shifting responsibility for prostitution onto the demand rather than the supply side, others have argued that the law has simply forced sex workers underground, where they are still offered no protection.

“It’s absurd that sex workers don’t have more protection, and their reputation suffers from the victimization. Jasmine suffered from the reputation and from someone spreading lies about her,” explained Jacobsson, who had professional ties with Jasmine through Rose Alliance, where the mother of two was a board member.

Jasmine told her colleagues in the Rose Alliance that the district court took away her children because she “romanticized sex work” and that it deemed her an unfit parent. Social services received a tip-off suggesting the she was using drugs and drinking in front of her children. There were even suggestions that the 27-year-old was working from home, Jacobsson told The Local.

“This couldn’t be further from the truth. For one thing, she hardly touched alcohol, but also, she was an upper-class sex worker. She would be coming into Stockholm from Västerås to luxury hotels, just once or twice a week, for a fee of around 4,000 kronor ($610) per hour,” she added.

“She was doing it all for her kids. And she enjoyed doing it. You tell me another job where a mother can earn 6,000 or 7,000 kronor a week and still remain a stay-at-home mum.”

While Jacobsson said the blame could be directed anywhere from the woman’s “lunatic” ex, to the police’s lack of action given his troubled past, or even the Swedish system’s lack of help for the killer himself, she said the lessons to be learnt from the incident are simple.

“Firstly, you can’t assume that people selling sex aren’t fit parents, and secondly, everyone deserves equal protection from the law. Journalists, for example, have all kinds of rights. Why can’t we have them too?”

The proceedings marked the first time an Iranian official has gone on trial for the purge.

Hamid Noury, 61, faces charges including crimes against humanity and war crimes for his role in the killing of as many as 5,000 prisoners across Iran, allegedly ordered by supreme leader Ayatollah Khomeini.

Last week, prosecutors called for a life sentence for Noury, who has been on trial in Stockholm district court since August 2021.

“It’s ironic, because I was witness to many of my friends being sentenced to death in one-minute trials in Iran. How different it is here”, Ramadan Fathi, a former prisoner who testified against Noury, told AFP.

On Wednesday, the final day of the trial, the judge set the date for the verdict on July 14.

“I hope these hands will be cleared … with the help of God,” Noury told the court, his palms raised to the sky and holding a Koran. “Friends, I love you, I’m not angry at you”, he told those present in the courtroom, his remarks in Farsi translated into Swedish by a court-appointed interpreter.

The defence had contested Sweden’s principle of universal jurisdiction — which allows it to try the case regardless of where the offences took place — and called into question the plaintiffs’ testimony.

“There is a lot of uncertainty about the way in which the name Hamid Noury arose in the testimonies”, Daniel Marcus, one of Noury’s two lawyers, told the court, calling the evidence “insufficient”.

According to the prosecution and survivors who testified against him, Noury was assistant to the deputy prosecutor of Gohardasht prison near Tehran at the time of the events.

He allegedly handed down death sentences, brought prisoners to the execution chamber and helped prosecutors gather prisoners’ names. Noury has argued that he was on leave during the period in question, and said he worked in another prison, not the Gohardasht one.

Noury was arrested at a Stockholm airport in November 2019 after Iranian dissidents in Sweden filed police complaints against him.

Throughout the nine-month trial, which briefly relocated to Albania to hear some testimony at the end of 2021, MEK supporters protested loudly outside the Stockholm courthouse.

A lawyer for the plaintiffs, Kenneth Lewis, said the evidence in the case was “overwhelming”. The defence “tried to find small, small holes, but in my opinion, they weren’t very comfortable” in their argument.

A lawyer representing the MEK expressed however concern that Noury — who is currently held in custody pending the verdict — would flee Sweden if acquitted, before an appeal could be lodged.

Ramadan Fathi, the former prisoner, said meanwhile he was “very happy to see with my own eyes” someone from the regime facing justice.

“Now that we’ve reached the end of this trial, I hope a day comes very soon when the entire leaders of this regime, perpetrators of this massacre, are brought to justice here or elsewhere.”

The trial has rendered Stockholm’s already chilly relations with Tehran even frostier.

Iran summoned the Swedish ambassador last week, the same day the prosecutor in Stockholm called for a life sentence against Noury. The Swedish foreign ministry has meanwhile advised its nationals against non-essential travel to Iran.

According to the Iranian news agency Isna, Iran plans to execute Swedish-Iranian academic Ahmadreza Djalali, who was sentenced to death in 2017 for spying for Israel, before May 21.