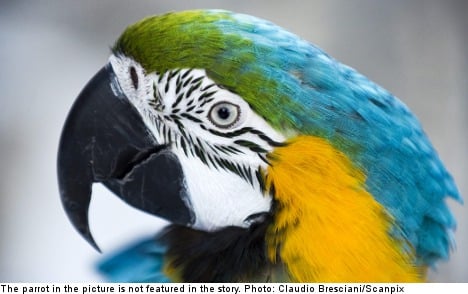 After a 75-year-old man died in Kronoberg in March from parrot fever, the illness has spread among those who were near to him during his illness, including care personnel.

“This person was very sick and it was an extreme case. It’s still hugely uncommon though, no one was infected third hand from the secondary cases we had,” Arne Runehagen, doctor at the Swedish Institute for Infectious Disease Control (Smittskyddsinstitutet), told the TT news agency.

Human-to-human transmission of parrot fever, also known as parrot disease, is exceptionally rare, with only one previous recorded case occurring, in Scotland. The disease is usually transmitted solely between birds.

The illness gives pneumonia-like symptoms to human sufferers, and results in high fever, diarrhoea, and severe headaches. The vast majority of the patients, however, survive the disease, and there are usually only five to ten reported cases in Sweden each year.

Parrot fever, also known as psittacosis, must be reported to the Swedish Institute for Infectious Disease Control as well as to infectious disease specialists at local health authorities.

It is commonly spread by parrots, such as macaws, cockatiels and budgerigars, as well as pigeons, ducks, hens, and seagulls.