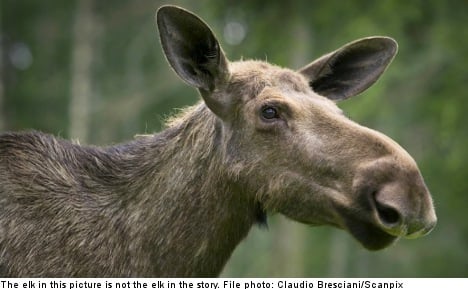 Late on Tuesday evening, police were alerted to the fact that a large one-year-old elk calf was wandering around inner city Gothenburg, just south of Götaplatsen.

The rogue elk headed to Vasaparken, but swung around and took a dip in the nearby canal, narrowly avoiding a boat that was heading in the same direction, according to a reporter who was on the scene from the Göteborgs-Posten newspaper (GP).

At 10.30pm, followed by a police escort and surprised bystanders, the beast returned to the park again, where it lay down to rest. A professional hunter was called to the scene.

“The hunter came to Vasaparken by 10.50pm. We then decided to put down the elk,” police officer Christer Fuxborg told GP, adding that the hunter took the body with him.

It is not uncommon at the end of summer for elk to wander into populated areas.

“The apples in the gardens attract elk in August and September, but we often see these kinds of visits from elk near large forest areas,” Fuxborg added.

“Luckily, finding lost elk in central Gothenburg is not a common occurrence.”