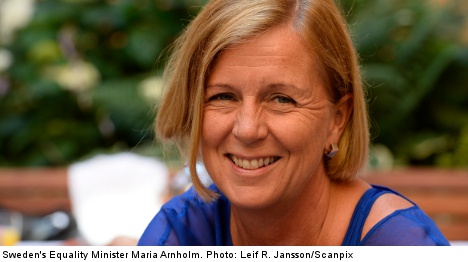 Despite Sweden being knocked out in Wednesday’s semi-final against Germany, Arnholm has bought tickets for the final on Sunday.

“It would have been extra fun to see it if Sweden was in it, but it’ll be fun anyway,” Maria Arnholm told The Local.

While international media may not be shining its most high-wattage lightbulb on the women’s Euro2013, the lady footballers have performed in arenas where bums on seats across the bleachers testify to their popularity in Sweden.

“Women’s football is the second biggest sport in Sweden, so of course we should care,” Arnholm said.

“There are people who say it’s more fun to watch audience friendly football, and while I’m not enough of an expert to say if women’s football is more audience friendly, I think it’s fun when real football-lovers call it that.”

She said the Swedish government encouraged municipalities across the country to make sure boys and girls had access to the same resources when they joined sports teams.

In Umeå, for example, local politicians decided ten years ago to allot access to sports fields, gym halls and arenas based on each individual team’s performance in their respective league – in essence eradicating gender as a factor, consciously or not, in resource allocation.

“It turned everything on its head, and kicked off a few years’ fierce debate and a lot of discontent,” Arnholm said. “But now we see that tons of girls have joined teams because they no longer have to go to the practice at the worst times of the day.”

Similar initiatives have been taken elsewhere in Sweden, the equality minister said, adding that sports budgets were managed at local level.

And while Swedish football lovers shed a tear alongside superstar coach Pia Sundhage on Wednesday night, Arnholm retains nothing but the utmost respect for the women’s trainer.

“She is such a fantastic idol and role model that she almost pushes Hillary Clinton off my personal first-place spot.”