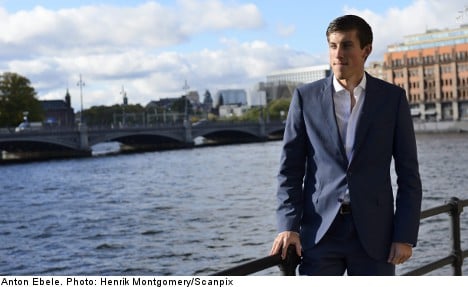 Three years later, he said he was tired of politics, noting that 99.5 percent of around 3,000 motions submitted by lawmakers each year were rejected.

“All this work and nothing happens. If it is not through the motions we should effect change, why do we have this tool? And how do you (really) bring about change?” he told public broadcaster Sveriges Radio.

He also slammed the partisan nature of Swedish politics, accusing politicians of spending more time finding fault with their opponents’ ideas than they did trying to find solutions to real problems.

“To me that’s the attitude of losers. No one has ever changed the world by complaining about other people and their ideas,” he said.

Abele was elected after founding an organization against street violence in the wake of the deadly beating of a 16-year-old boy in Stockholm in 2007.

He said he would step down at the end of his tenure in 2014 to “live a life that might finally be a bit more like everyone else’s.”