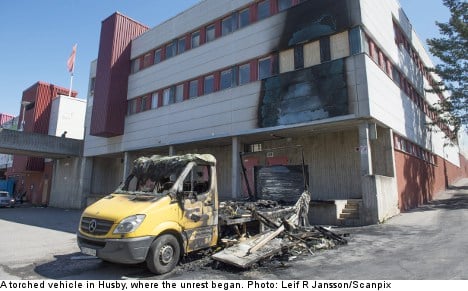 Only one man has been jailed following the week-long troubles that plagued Stockholm in late May. He was sentenced to prison for burning two cars, while another two men have been fined for weapon and drug crimes.

Of the other 400 cases reported to police, over 90 percent have been put to sleep by police officials.

Daniel Ångman, a Husby police officer in charge of following up the reports, said that the most difficult challenge has been identifying the perpetrators.

“Much of it now is impossible to solve. There are no witnesses, no one has seen anything. There were a lot of people, many of them masked, it was dark, and many of the officers needed to defend themselves more than look at what was happening,” he told Sveriges Radio.

Even the security footage of the incidents has been largely unhelpful to police, as the vast majority of crimes were committed after sundown.

Now, Ångman and his team at the Västerort police are concentrating on the the last few cases they have, in which they are investigating ten separate incidents with 16 suspects.