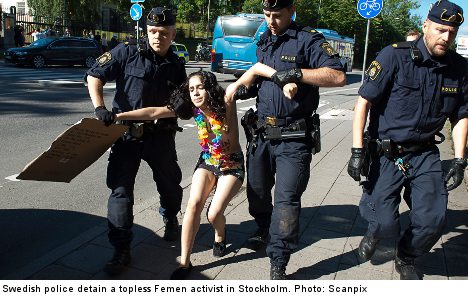 As the police carted away the writhing activists, about 200 people assembled for a planned demonstration across the road from the embassy in Stockholm’s verdant diplomatic quarters. Police were calm and in control, participants said, only stepping in when demonstrators obstructed traffic.

IN PICTURES: Topless Femen activists carted away by Swedish police outside Russian embassy in Stockholm

“There is a lot of anger here but people are channeling it in a good way. There’s a lot of rainbow flags, people are happy and smiling because they are making their determination felt,” Sören Juvas, Social Democrat ombudsman and former head of LGBT rights organization RFSL, told the Local on the phone from the scene.

Hate-mongering against LGBT persons on the rise in Russia after recent law. Repulsive. Inhuman. http://t.co/xjRKtrRp8R

Juvas welcomed that Foreign Minister Carl Bildt had made Sweden’s concern about Russian legislation on the lesbian, gay, transsexuals and queer community known, saying that European Affairs Minister Birgitta Ohlsson had long been left to criticize unequal treatment by herself.

“It seems more like Birgitta Ohlsson’s own personal conviction, but it doesn’t appear like she gets a lot of support from the rest of the government,” Juvas said. “The government’s attempts to act on this are a bit puny.”

He said the Migration Minister Tobias Billström being bisexual and top ministers having family members in same-sex marriages seemed to mean little to the government as a whole.

“It shows that sexual orientation isn’t a determinant factor in whether you stand up for people’s equal value or not,” Juvas said. “This Russian law turns homo-, bi- and transsexuals into fifth-class citizens, Russia has differentiated the value of human beings.”

Yet as Sweden has recourse to putting pressure on Russia through the Council of Europe, there appears to be mostly support for LGBT rights among western European nations. Last year at the Saint Petersburg Pride Festival, the Swedish, British and French consuls were all in attendance.

“There is a new Berlin Wall in Europe,” Juvas said. “It splits the European countries and it’s not just a question of LGBT rights, but also how you treat minorities such as the Roma.”

“The EU placed demands on candidate countries before they joined, but they need to keep up the pressure when we can see that countries start categorizing people and giving different groups of people different legal statuses.”