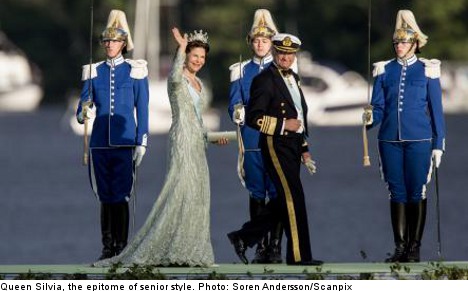 As a twenty-something-nearing-thirty I do not profess to know the minds of the “older” generations. I do know, from conversations with older friends and relatives, that just because you reach a certain age you do not stop caring about the way you look.

And yet, for the most part, over fifties are banished from catwalks and ad campaigns. Funny, seeing as many of the fashion world’s greatest designers and chief editors of the most influential magazines are over fifty: Anna Wintour, American Vogue (63) Alexandra Shulman, British Vogue (58) Carine Roitfeld, Vogue Paris from 2001 to 2011 (58) not to mention Jean Paul Gaultier (61) and Marc Jacobs (50).

Back in Stockholm, there’s a decent spattering of well-dressed people in their fifties and sixties. Smart, effortless, clean; heck, it’s like they’re still alive enough to care about dressing well.

Queen Silvia of Sweden, 69 years of age and elegance epitomized.

IN PICTURES: Click here to check out Queen Silvia’s style through the years

Of course, Sweden’s Royal first lady probably has a stylist or ‘royal dresser’ but her plucky yet refined style is worthy of note regardless. Pretty much everything Her Majesty wears perfectly suits her role, her age and (permit me to add) her body. Queen Silvia’s confident colour choices and gladness to show a little skin is worthy of a courtesy. And let’s face it, she’s a knock-out.

I’ve noted three groups of senior style in Stockholm: those who, after decades of dressing themselves, still haven’t got it right; those who get it right and those who, quite frankly, don’t give a damn, either about fashion (and probably never have) or about the opinions of others concerning their style.

I recall one woman a couple of months ago in Stockholm head-to-toe in ruby red. She was Dorothy from the Wizard of Oz who, after falling in love with her fierce red heels, decided to coordinate everything else with them: hat, dress, tights, handbag, and lipstick.

Squinting, she resembled a crayfish and yet I was suitably impressed by her bold, unapologetic, dramatic style.

As my brain spun into a child-like, imagination whirlwind where I considered asking the Red Lady to tea, I couldn’t help but smile. I imagined listening to stories of how she dressed when she was in her twenties over tea, and the men she courted (one was called Max). I imagined she worked in a dress shop, went to the movies on a Thursday evening and had a collection of pearls and jewels to rival any rich duchess.

A week or so later, I gathered another addition to my tea party; an old boy in braces. He wore a mismatched tweed jacket and trousers topped with a fedora hat that Ol’ Blue Eyes himself would surely had in his collection. It was love. Warm, fuzzy fashion love.

Thankfully, over-fifties are themselves on trend.

Let’s also not forget that like buyers of ridiculously expensive supercars, those who buy high-designer fashion, especially couture, are often of a ‘certain age’ because they are the ones who can afford it.

Fashion survives, not just because of newness and youth but because of its older fans. If age isn’t something to be celebrated we’re all royally f*****d.