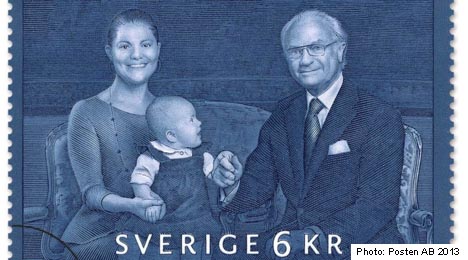 Princess Estelle features in the latest set of stamps issued by the Swedish postal service (Posten AB). The toddler is sat on her mother Princess Victoria’s knee with grandfather King Carl Gustaf XVI holding her hand.

“It’s special to do the first stamp of Estelle. It’s fun that a little person who has only recently seen the light of day can appear on a stamp without even knowing it,” said stamp designer Mårten Gustafsson to the Expressen newspaper.

Estelle, who is almost 18 months old, is making her stamp debut a bit earlier than her mother Victoria. She first appeared on Swedish mail at the age of three.

The picture upon which the stamp is based comes from the private royal family album was only taken recently.

“It’s a privilege to work on this photo. We were excited when we got to the palace as we could portray them in a more casual way,” added Gustafsson.

Along with the signature stamp of Estelle and the other royals there is also a solo stamp of Carl Gustaf and another celebrating the King’s 40 years on the throne.

Royal press officer Bertil Ternert said the custom of royals featuring on stamps has been around for generations.

“Kings and stamps have gone together since the beginning of stamps in Sweden,” he told Expressen.

Collectors can pick up the new stamps for six kronor each when they go on sale on August 22nd.