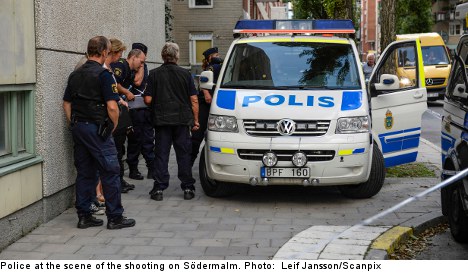 Police officers arrived at the Södermalm island address on Magnus Ladulåsgatan around midday after receiving reports of a disturbance. They found a man who had been injured by gunfire.

“He was hit by several shots, some of which hit him in the face,” Peter Matilainen of the Stockholm police told the TT news agency.

The man was taken to hospital where he later died from his injuries, prompting police to open a murder investigation. Police cordoned off the area and have conducted interviews with witnesses.

“It’s still somewhat unclear what happened,” police spokesman Ulf Lindgren told the TT news agency, but his colleagues later on Monday arrested a woman on suspicion of aiding a criminal.

“She’s suspected of protecting a criminal because of actions she took on the scene that may complicate the investigation,” police spokeswoman Towe Hägg told TT.

Police have brought in a further five people for questioning, but have not named anyone as suspected of pulling the trigger. The investigators were also yet to establish the identity of the victim.