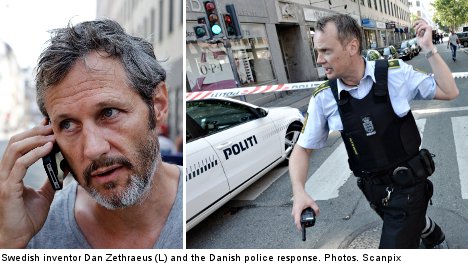 Dan Zethraeus, who works as a television director for Swedish public broadcaster Sveriges Television (SVT), had driven over to Denmark and was making his way back to his car on Tuesday when he encountered police barricades. Clueless to what could have caused the scrum, he retreated to a nearby cafe.

When his phone rang, it was a Swedish reporter asking why his car was at the centre of a large-scale terrorism alert operation in Copenhagen, as wires snaking up from under the chassis over the door had set off their suspicions.

“I rushed off to the police and explained that it was an invention,” Zethraeus told The Local. “The bomb squad smiled a bit and weren’t particularly upset, but the police were quite tense.”

He noted that he had driven his car around with the odd contraption for about a month back home in Sweden, without causing any misunderstandings with law enforcement.

Denmark, meanwhile, has dealt with a heightened terror alert ever since the 2005 publications of caricatures that poked fun at the Muslim prophet Muhammad, that resulted in death threats and a foiled plot to blow up the newsroom of the Jyllands-Posten newspaper in 2010.

“It’s an invention and not meant to be perceived as a terror threat,” Zethraeus said of his invention, an environmental system which he had hoped to patent in the not-too.distant future. “But I guess that’s gone up in smoke, as there’s been so much attention due to this.”

And while the Swedish inventor said he was sincerely sorry for scaring the Danes, he also said he wished they’d run his licence plates through the register and called him first so he could explain.

“It wouldn’t have taken more than a few minutes in such an important case,” he told The Local. “I’m sorry that people were frightened, that’s not what I wanted, I just wanted to save the world from environmental destruction.”