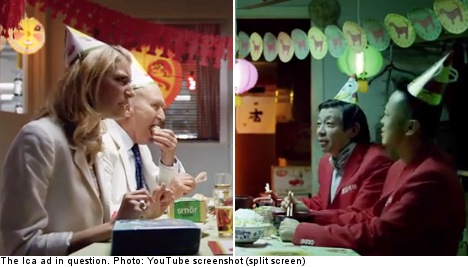 “This ad made me puke in my mouth. Bye bye Ica,” viewer Maria Westerström wrote in a comment on the grocer’s Facebook page.

Another commenter, Catherine Simpson, appeared to slam Ica’s ignorance about how the animals are treated in China by making light of the tradition in the ad.

“Godammit Ica, what a pointless advertisement. How can you be so ignorant about how dogs in China and other Asian countries are killed.”

The angry comments are among many posted on Ica’s Facebook page and other social media fora in reaction to an advertisement airing in Sweden this week, aimed at promoting low prices on items often purchased for crayfish parties that dominate the Swedish social calender in August.

In the 30-second advert (embedded below), fictional Ica employees who appear regularly in light-hearted ads for the grocery store chain discuss the particular Swedish culinary tradition that kicks off in August and during which boiled crayfish are consumed, often with copious amounts of alcohol as attendees sing drinking songs.

While one character in the ad hails Swedish crayfish parties as “truly unbeatable”, another responds: “Not if you ask someone from the Chinese province of Wang Dong. There, they serve dog as a delicacy.”

“Dogs?!” another chimes in with a wrinkled nose.

“Chinese people have such weird food habits,” the woman responds.

The scene cuts to a Chinese family at what appears to be a dog-eating party, with the room decorated with pictures of dogs. The family wears hats with cartoon dogs on them, mimicking the Swedish tradition of donning paper caps decorated with crayfish.

“Have you heard that Swedes have these big parties where they suck on crayfish?” one man in the Chinese family says.

“Some of them even eat the intestines.”

The Chinese partygoers then break into a drinking song with the refrain, “Small dogs, small dogs, are funny to see,” a reference to a popular Swedish song Små grodorna (‘Small frogs’).

In addition to social media reactions in Sweden, a petition has posted on the Care2 petition website calling for Ica to pull the ad garnered nearly 700 signatures from around the globe in less than 24 hours.

“I’m ashamed of being Swedish, those at Ica should’ve known better about what’s going on in China,” one anonymous petition signer wrote.

“Our intention was to hightlight the Swedish tradition of eating crayfish, which can be seen as a little strange in other countries,” he told the Expressen newspaper. “And we apologize if the film has been interpreted in any other way.”

However, Sjöstrand added that Ica has no plans to pull the ad.

The Local’s efforts to get a comment on the matter from the Chinese embassy in Stockholm were unsuccessful.