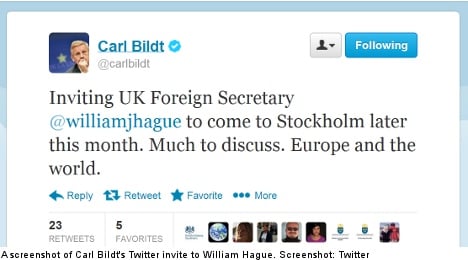 Bildt, a strong advocate of “Twitter-diplomacy” whose @carlbildt account boasts more than 220,000 Twitter followers, took to the social media site on Friday morning to announce that he was inviting Hague to Stockholm.

“Inviting UK Foreign Secretary @williamjhague to come to Stockholm later this month. Much to discuss. Europe and the world,” he wrote.

Less than 30 minutes later, Hague offered his reply to the invitation.

“@carlbildt thank you for the invitation to Stockholm – I will be delighted to visit in late August as you suggest,” the UK foreign secretary wrote, prompting another response from Bildt.

“@WilliamJHague Most welcome! I’ll make certain you will have a good, interesting and rewarding time in Stockholm,” Bildt wrote.

The announcement comes two days after news that US President Barack Obama was travelling to Stockholm in early September ahead of the G20 summit in St. Petersburg, Russia.

According to a statement from the Swedish foreign ministry, Hague will visit Sweden from August 28th to 29th, one week before Obama’s visit on September 4th and 5th.

Among other things, Hague and Bildt are expected to make a joint appearance at the Swedish Institute for International Affairs (Utrikespolitiska institutet). Hague will also make a speech at the foreign ministry’s annual meeting of Swedish ambassadors.