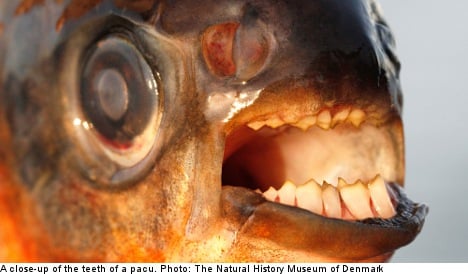 Ever since a fisherman reeled in a 21 centimetre pacu in the Øresund Sound off southern Sweden, experts have been on alert. The fish species, a relative of the notorious piranha, caused museum staff in nearby Denmark to put out a warning.

“Keep your swimwear on if you’re bathing in the Sound these days – maybe there are more out there!” the Natural History Museum of Denmark wrote.

The fish species is more usually found in warmer climes, and has a reputation as something of a ball breaker among male swimmers, an expert confirmed for The Local.

“The pacu is not normally dangerous to people but it has quite a serious bite, there have been incidents in other countries, such as Papua New Guinea where some men have had their testicles bitten off,” said Henrik Carl, fish expert at the Danish museum.

While Carl said the museum’s warning about the pacu, sometimes known as the “ball cutter”, was meant “as a bit of fun”, human victims of the pacu are rarely laughing.

“They bite because they’re hungry, and testicles sit nicely in their mouth,” he explained.

“And its mouth is not so big, so of course it normally eats nuts, fruit, and small fish, but human testicles are just a natural target. It’s not normal to get your testicles bitten off, of course, but it can happen, especially now in Sweden.”

Pacus have reportedly killed fishermen who have bled to death after losing their testicles.

While Carl admitted that he was unsure if there were any more pacu in the Swedish waters, the team at the museum is looking into the fish’s DNA to confirm whether it is indeed a pacu. The fish, he explained, looks exactly the same as a piranha and is even a member of the same sub-family.

“They are almost identical to the piranha, you couldn’t even tell from the outside. It’s just that they have different teeth. Flatter and stronger, perfect for crushing,” he added.

While the Öresund pacu may not have caused any harm before it was caught, Carl said there is nothing to fear for other men planning to take a dip in the area.

“No, there’s nothing to worry about… you’re more likely to drown that get your nuts bitten off,” he told The Local with a laugh.

“However, it could become a problem some time in the future if it’s not the only one. This one was the first, but who knows, it’s probably not the last.”

The pacu, native to South America, can grow up to 90 centimetres and weigh up to 25 kilogrammes.