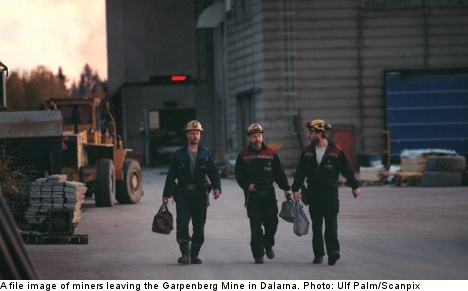 A total of 30 miners were underground when the fire broke out at the Garpenberg Mines in Dalarna, central Sweden.

Twenty-six of the workers made a quick getaway, however the remaining four were working further along in the mine and headed to a rescue chamber instead to wait for help. Just before 11pm, and 90 minutes after the blaze broke out, the four miners were pulled to safety.

“Those who were left in the rescue chamber have come up now, everyone is in good health,” Lars Westerfors, emergency worker on the scene, told the Aftonbladet newspaper.

Experts are still unsure exactly what caused the fire, but suspicions point to a vehicle that may have gone up in flames.

Marcela Sylvander, the spokeswoman from the mining company, told the TT news agency that the emergency shelter had fresh air, water, and access to telephone and radio contact. She added that the mines had an electronic system to alert workers above ground how many miners were underground at all times.