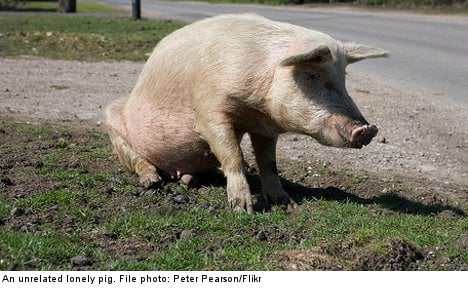 The warning comes from animal welfare inspectors with the Västergötaland County administrative board (länsstyrelsen) who are fed up with the farmer for dragging his feet when it comes to attending to the pig’s welfare.

“The pig is alone…this has been a temporary solution,” the inspector said following a June visit to the farm, located in Marks municipality near the town of Borås. “But this temporary solution has dragged on and on, from a month or two to several years.”

Swedish regulations governing the care of pigs state that hogs are “social animals” that thrive in the company of other pigs.

“It contravenes good animal welfare to keep a pig in social isolation without the company of fellow members of its species,” the inspector wrote.

The recent write-up is the latest missive in a two-year effort by county officials to force the 53-year-old animal owner to find a mate for his pig. Back in January, an inspector also noted that the pig remained all by itself and that plans to introduce not to just one but two sows to the swine’s sty following a cross country move failed to materialize.

The owner defended his decision to not add more animals to his farm by explaining the new facility was not yet ready to house all the animals, which according to the inspection report included six goats, seven sheep, one dog, and five cats. The planned move to Uppsala is now scheduled for September, the owner has promised.

Apart from an elderly goat suffering from being underweight, the inspectors worried the most about what a county administration staff member simply dubbed “the lonely pig in Marks municipality”.

While officials have ordered a veterinarian to take a look at the goat, authorities have also threatened to take the isolated pig away from the local man if he does not find it a suitable mate in the near future.

If the man doesn’t find a sow for his hog within a month, the pig will be taken away and the man could also lose the right to own animals.