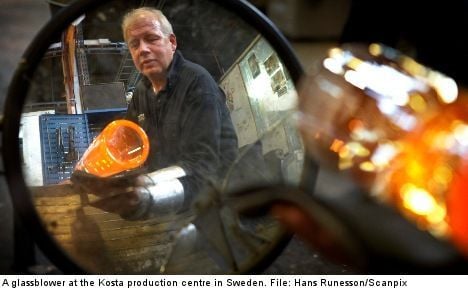 Regional Smålandsnytt reported on Wednesday that all production will now cease at the glass works in southwestern Sweden. Workers who have remained at the factory since owners New Wave Group announced its closure in October last year will get paid for this week, but it will be their last.

“It is really sad that we haven’t found another solution, but we have to at the same time do what is best for the company and for the other employees who are still with us,” Orrefors Kosta Boda CEO Magnus Andersson.

New Wave Group had been in talks with several potential buyers, Smålandsnytt reported, but was not able to close a deal.

The Orrefors trademark, however, will survive and there are no plans to sell the buildings.

Already in April, the company said that seven out of ten glasses it produces in the future will be made abroad, where it is also scouting for a new breed of buyers, for example in China with a planned store in Shanghai.

The company has not turned a profit for almost five years, with the financial crisis pulling the rug from under some of its key markets. Greece was once the company’s third largest market and has now shrunk to near nothing.