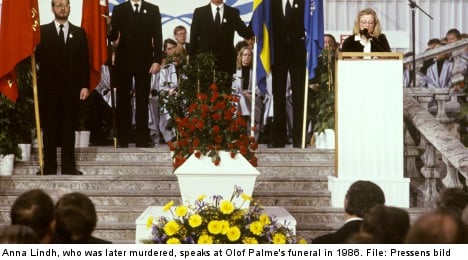 An advance team from the US Secret Service has already scoped out the Swedish capital over the past few days, the Expressen newspaper reported on Wednesday. The team travels around the world in the lead-up to presidential visits to deem how safe the countries are, and decided that Sweden was “high risk”, sources told the paper.

When asked about the Secret Service’s assessment, Sweden’s Prime Minister Fredrik Reinfeldt remained confident that Sweden could manage the security needs associated with the visit of a US president.

“I think we have quite some experience with having high-profile people in Sweden,” he told The Local.

He pointed out that in recent years, he has hosted John Kerry, Hillary Clinton, Condoleezza Rice, Vladimir Putin and Medvedyev in Stockholm.

“I think we have some experience, but of course we work together with the security personnel with the Secret Service and the White House in preparing for this meeting,” Reinfeldt told The Local.

Olle Wästberg, a former Consul General to New York and the former Director General of the Swedish Institute, believes the idea of Sweden being high risk is hard to confirm.

“Statistically, which is likely how the Secret Service analyzed the matter, Sweden is a high risk country. There have been links to the al-Qaeda and two political murders,” he told The Local.

Wästberg recalled when he was visiting New York with then Prime Minister Göran Persson in 2004, only to be met by four security escort vehicles, which took the Swedish convoy at high speeds along closed roads to their lodgings.

“When I asked the Secret Service agent if they always did this with visiting prime ministers, he responded, ‘Only from the risky countries’,” he said, adding that the operator mentioned the two political murders, with one unsolved.

“Technically, we are quite secure here, but things do happen. You can get close to politicians at events like Almedalen, even if you can’t share a taxi with them,” he added, referring to the Norwegian Prime Minister’s recent stunt driving citizens around Oslo in a cab

However, Wästberg added that Sweden’s reputation is so strong even murders can be referred to as a one-off.

“When the man blew himself up in Stockholm in 2010 the New York Times ran the headline ‘Even in Sweden’. The reputation here is so strong that incidents like this may always be labelled an exception.”

The security team that visited Stockholm noted that the city’s buildings, as well as government quarters, were easily accessible, specifically pointing to the high profile murders of Palme and Lindh.

Palme was gunned down in 1986 on Stockholm’s Sveavägen as he and his wife walked home from a late night screening of the film The Mozart Brothers. The killing has spawned myriad conspiracy theories but no one has ever been jailed for the murder.

Lindh was stabbed to death in 2003 while shopping at the NK department store in central Stockholm. The killer, Mijailo Mijailovic, was sentenced to life in prison in December of 2004.

US President Barack Obama will visit Sweden in early September after ditching plans to head to Moscow to meet with Russian President Vladimir Putin.

“Following a careful review begun in July, we have reached the conclusion that there is not enough recent progress in our bilateral agenda with Russia to hold a US-Russia Summit in early September,” the White House wrote in a statement last Wednesday.