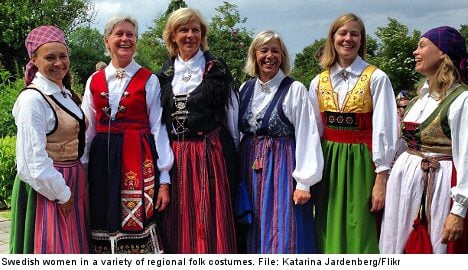 A number of years ago, back in ol’ Blighty, I was watching property programme Location Location Location. For those unfamiliar with this particular TV show – the format is basically to take couple or family looking for a new house around a number of properties in the hope of finding the couple’s dream home. On a particular episode were a young couple, an English chap and his Swedish fiancée. With his soft curls and her natural beauty, they made quite the lovely couple.

I remember thinking how sweetly dressed she was: very natural, beatnik and cute. You can imagine then how, on my first trip to Sweden years later, I was somewhat perplexed with a style-set favouring charcoal tones over colour and, I guess, an absence of bohemian romance.

I just accepted this new, cool style. And anyway, I liked it; slick black pieces in simple cuts and androgyny looked fresh, unseen. The uniformity was even enticing. I’d never seen so many people in one place that appeared to be so in sync with one another. The question is where did this dark, urban dressing come from?

The answer partly lies with Sweden’s super successful denim brands. Acne, founded in 1996, became successful internationally for its androgynous dress codes: unisex jeans and an edgy look. Cheap Monday, with its skinny jeans, skull logo and reasonable price appealed to Scandinavia’s youth and quickly spread to the rest of Europe. A link-up with H&M in 2008 helped.

IN PICTURES: What is Swedish style, and what do Stockholmers think of it?

A country so keen on sports and leisure, with the space and landscape to really get to grips with outdoor pursuits, had a real need for practical clothing. Fashion labels like J. Lindberg began offering chic sportswear-inspired looks for the masses.

Yet there are movements afoot across the world for a more bohemian look. In Paris, for example, Russian couturier Ulyana Sergeenko has wowed street style bloggers for years now by fusing together militaristic, near Soviet, shapes with babushka headscarves and full fifties skirts.

Last month, US actress Scarlett Johansson appeared on the pages of Harper’s Bazaar magazine, wearing a long-sleeved T under a golden bodice and full skirt, which while light years away from the texture of Swedish national dress, had the shape of it.

In Sweden, of course, some may associate the traditional national costume too much with the royal family doing their national-day duties. Regional varieties, which add spice to an already elaborate sartorial set-up, have also been adopted by anti-immigration Sweden Democrat party leader Jimmie Åkesson – which not all Swedes, “ethnic” or otherwise, are happy with.

But a move back to more detailed, folksy fashion doesn’t have to mean giving in to political subtext, nor to a cuteness that sacrifices cool and edgy. We’re not really talking about the Swedish princesses in full-on folk on June 6th here (more’s the pity).

Modern folk, or mofo, if you will (*yes I did) originates from traditional folksy garb in its primary colours, aprons, bodices, long sleeves and bonnets. New folk is a renewed love for deep hues, print and hand-crafts such as embroidery, knitting and loads of pretty pretty flower motifs.

As seen earlier this year, it’s Sweden’s talented youth who are at the forefront of a re-emergence of a country-inspired clothing campaign that wonderfully reflects old-fashioned Swedish culture in a new, exciting way. The Beckmans College of Design graduates translated a love of Swedish countryside – its lakes, forests and fauna – into something melancholic and beautiful.

So while Swedes, including many of its top designers, seem content with minimalism and muted fashion that perhaps reflects Sweden’s practical mind-set and uniformity; I wonder if Sweden’s style buffs will soon tire of black, grey, dark and edgy and seek something brighter, intricate, expressive. If so, there are those out there that can provide.

Craft-based high-fashion has a home with Sandra Backlund, who creates the most intricate, architectural wool designs. Whilst her work could not be described as pure folk, and the colours are still muted, Backlund’s age-old craftsmanship in crazy space-age shapes is soft and wild at the same time. Her recent use of metal yarns pulls wool into the right now.

Another? Marimekko. Although the brand is actually Finnish, you will find its stores all over Sweden. What the label does very well is modernizing folksy prints. A real alternative to Acne’s gritty chic. Register with their website and you even become part of the ‘Marimekko village’. How cute.

It’s time to mix it up country-style.